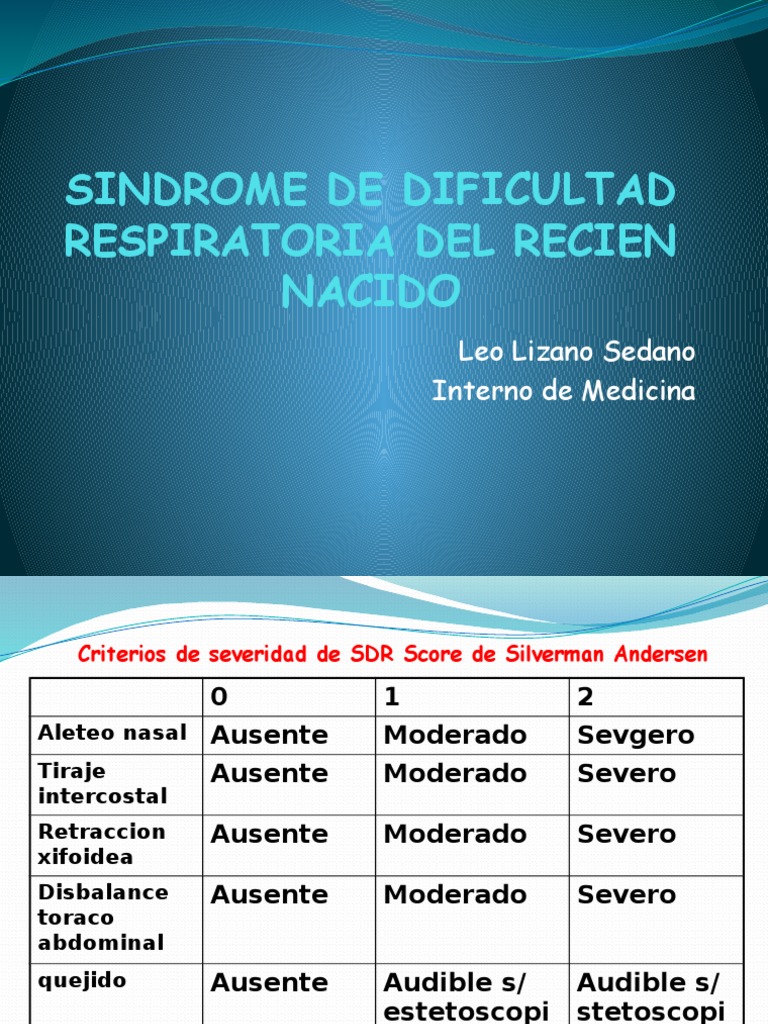 The respiratory distress syndrome RDS was considered as a tracer condition given that it is representative of the complex care that NICUs provide. The questionnaire collected information about the diagnosis and treatment of RDS, such as availability of explicit protocols for endotraqueal intubation, assisted ventilation and alveolar surfactant.

It also gathered the opinion of attending doctor about availability of alveolar surfactant, dopamine and dobutamine; their perception about the quality of care at the NICUs where they were working and about the mortality rate of newborns with RDS. Review of the clinical charts of children with respiratory distress syndrome A representative sample of clinical charts of infants with RDS treated in selected NICUs was estimated.

A data collection instrument was designed to collect the information. Similar to the other instruments, this was designed and validated by four neonatologists. The instrument gathered information to learn about the history of antenatal care, gestational age and birth weight, APGAR score, resuscitation maneuvers, gasometry and x-ray exams, administration of alveolar surfactant, opportunity of referral, use of mobile incubators, conditions of the newborns at admission, number of days with assisted ventilation, comorbidity and mortality rate.

The sampling design was based on a probabilistic process; NICUs in fifteen states were included in the study. Results Descriptive analysis of the SMNG database The original database had 11 newborns out of which 1 were not included in the analysis because their information was incomplete. The final analysis included 9 newborns.

States such as Jalisco, Guanajuato, Mexico and with no specific identifiable pattern among states and type of respiratory disorder. Table II illustrates the distribution of neonatal respiratory disorders by postnatal and gestational age of newborns admitted to NICUs.

Regarding gestational age, it was observed that among the neonates with 37 weeks or less at birth, the most common respiratory disorders were RDS These are cumulative percentages. Low capacity NICUs predominated, although the provision of equipment and personnel was proportional to their capacity. Low capacity NICUs did not have portable incubators, fewer pediatricians, neonatologists and pediatrics residents. The department heads of the NICU considered as appropriate the supply of necessary drugs to care for infants with respiratory distress.

All of them were working in the morning shift.

Most of NICUs had explicit protocols for endotracheal intubation and mechanical assistance to start the ventilation.

Attending medical doctors considered as low the availability of drugs such as surfactant Only Table V describes the analysis of clinical charts of newborns admitted to neonatal intensive care units due to respiratory distress syndrome. The alveolar surfactant was administered to Upon arrival to the NICU The most common comorbidities in descending order were sepsis, necrotizing enterocolitis and intracranial hemorrhage.

The mortality rate in this sample was Discussion The four sources of information provided a comprehensive picture of the care that newborns receive at NICUs. The characteristics of the newborns at admission, available personnel, supplies and infrastructure, and the view of medical doctors provided valuable information.

The variability in the number of newborns with neonatal respiratory disorders among the states might be explainable. This can be due to the size of the population affiliated with Seguro Popular, or the number of accredited NICUs in the states when compared with those accredited in other states. It would be advisable that future studies address in-depth these differences. Among the five neonatal respiratory disorders, four of them are the leading causes of death in NICUs.

Transitory tachypnea of the newborn has very low mortality rate. The cost of treatment for this condition is considerably lower that the cost for the other four respiratory disorders. These conditions require highly qualified health personnel, and expensive supplies for its treatment, such as drugs, intravenous solutions, equipment, mechanical ventilation and so forth.

The actual costs of these conditions are not fully known. It is advisable to estimate the costs of their treatment. Admission of the newborn to the NICU within the first 24 hours after birth increases the possibility of reducing mortality and neurological sequels. Fifty percent of newborns in this sample did not have this opportunity because they were admitted 24 hours after birth.

An important flaw of FPGC registries is the lack of information about the health outcomes of the newborn at discharge.

It was not possible to learn whether the newborn survived or died. Including this information is absolutely necessary given its importance for decision-making. To evaluate the potential sequels of these respiratory conditions, it is advisable to run follow-up studies until these children reach 5 or 6 years of age. A possible explanation was that the newborns with this condition were administered alveolar surfactant more often.

An opposite situation happened with premature newborns in which the main problem is the low synthesis of alveolar surfactant. Evaluating the characteristics of the structure of the NICUs is a complex matter. An article reported that 35 out of the 50 states in the United States of America had wide variations regarding the capability of response of the NICU. Three criteria are required to fulfill the national regulatory norms.

These criteria include capability, turnover and percentage of occupancy. The study concluded that in the US there is a wide variability of care.

In the present study, the set of NICU showed wide variations in the different levels of care. The structure of most of NICUs was appropriate in terms of the number of intensive care beds, human and material resources.

This situation was confirmed regarding the proportion of neonatologists, pediatricians and nurses working in the three working shifts. However, given that All NICU had a nosocomial infections committee, although this study had the limitation of not quantifying the mortality rates due to nosocomial infections or checking whether the committees were actually working.

In this same context, drug supply to care for neonates with RDS is another relevant aspect of the evaluation of the structure.

The NICU had specific protocols for ventilator support, endotracheal intubation and most of medical doctors were trained on cardiopulmonary resuscitation. The main type of morbidity associated to early-term delivery is respiratory morbidity.

This is explained in part by the relative immaturity involved in elective delivery, and partly by caesarean section deliveries in which fewer catecholamines and cortisol — compounds that contribute to lower production and increased clearance of lung fluid — are released during labour.

Other authors have obtained similar results, for instance is the important study published by the Consortium on Safe Labour, which included , neonates. While in all of these studies the percentage of the different conditions that compose neonatal morbidity in these patients is not too high, it does have a considerable impact in the healthcare systems of the various countries, as the small increases in the rate of neonatal intensive care admission and length of hospital stay involve a considerable economic burden, with the study by Clark et al. Lastly, we should note that morbidity in the ETNB population not only affects the neonatal period, but that this population shows lower IQ scores and increased special educational needs in children of school age compared with the FTNB population.

We observed a clear increase in respiratory morbidity in ETNBs; non-respiratory morbidity was also considerable, with significantly higher rates of hypoglycaemia and non-physiologic hyperbilirubinaemia which, on their own, can bring about neurological disease in the long term.

These data would allow us to evaluate possible changes to obstetrics protocols for the benefit of neonates and their mothers.

When it came to potential neurodevelopmental alterations, this study was limited because there was no follow-up of the early-term population that did not have neonatal complications. Thus, we do not know whether our ETNB population shows neurological abnormalities in the mid- or long-term.

Conflicts of interest The authors have no conflicts of interest to declare. References American College of Obstetricians and, Gynecologists. Nonmedically indicated early-term deliveries.Thus, we do not know whether our ETNB population shows neurological abnormalities in the mid- or long-term. Only Infectious enteritis and proctocolitis. Evaluation of the quality of care of the newborn with complications is an essential element for the design and implementation of strategies for improvement aimed at reducing the rates of neonatal mortality in Mexico. 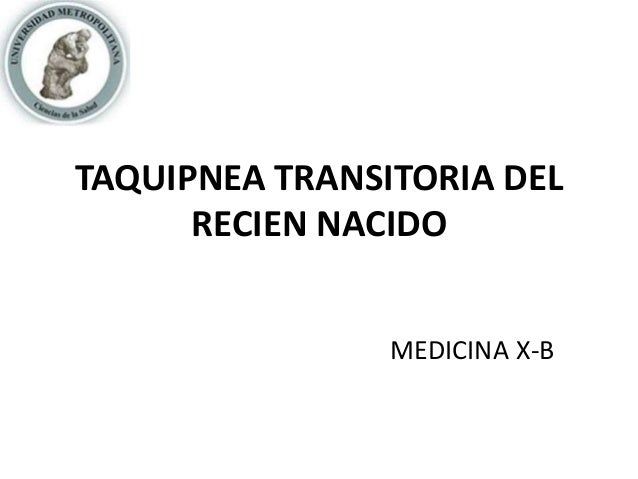